There are many places in the beautiful city of Mumbai which one should visit when they are travelling to the financial capital of India. In fact, there are some places which are very important and are a landmark in the city. The city seems incomplete without them.

Shivaji Park in Mumbai is one such place. It is located in Dadar area of the city and is famous as the largest park in the city. This place also has a lot of historical and cultural importance as there have been a lot of political gatherings here and lots of slogans were raised both in pre-independence and post-independence era. This place is also the cradle of the Indian cricket and the park covers an area of almost 28 acres.

This place is an open ground and at one side there is an edge and on the other hand there are hangout places for people who belong to any age. There is a paved walk path which surrounds the entire park from outside is the best place for the people to have a walk or a jog around the park. The inner circumference of this places us 1.17 kilometres. Inside the huge area which this park covers there are two clubs. One is known as the Shivaji Park gymkhana and the other one is called the Bengal Club. The rest of the ground is an open space where one can do any kind of sports activity or other things. There along the periphery of the ground, is the gymnasium known as the Samarth Vyayam Mandir and Shivaji Park Nagarik Sangha which was found in the year 1947. Then there is a children’s park along with the Nana- Nani Park which is solely dedicated to the senior citizens of the city, Scout’s Pavilion, a library and a temple which is dedicated to Lord Ganesha. 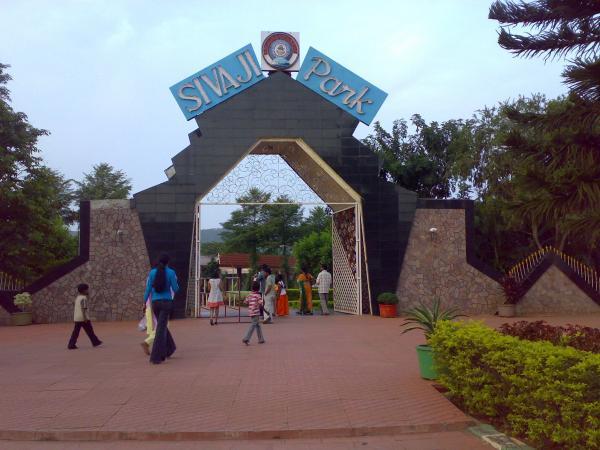 On the entrance to the east of the park, there is a bust of Meenal Thackeray who was the wife of the Shiv Sena leader Bal Thackeray, and this entrance is mainly for the pedestrians. Bal Thackeray was also cremated here after death.

In the year 1925, this park was formed by the Bombay Municipal Corporation and at that point of time, India was under the rule of British Government. At the time of foundation, this park was named as Mahim Park. This name existed for two years and then it was renamed after the legendary Maratha warrior Chhatrapati Shivaji. There have been a lot of rallies in this park since it was built and that is why; this place is historically very important.

The statue of Chhatrapati Shivaji after whom this park is named is located at the western part fo the park. This is a very rare posture of Shivaji which has been converted into a statue where he is not shown as a warrior but as a leader. This statue was built in the year 1966.

This park is also a famous cricket hub as here is eight cricket clubs and they produce a lot of international cricket tournaments for India. This place has Arabian Sea in the background and so this place also has a brilliant scenic beauty. That is why; a lot of people love to sound their leisure time here. People get a lot of fresh air here.

How To Find A Good Campervan Company

Benefits Attained In Tours & How To...

Having an Event in Seattle with Out-of-State...

HOW MANY WAYS DO WE USE THE...

Visit the Wine Regions of Australia by...