3 Reasons to Choose Turks and Caicos for Your Next Holiday

Choosing just three reasons why Turks and Caicos is such a great holiday location is in itself a tough task. That said, here are three of the most alluring reasons to visit TCI which are already largely responsible for why TCI’s tourist trade is bigger than ever, and still growing.

The climate in Turks and Caicos could not be more worlds apart from that seen here in the UK. Because Turks and Caicos is located in the northern Caribbean region of theLucayan Archipelago and as such within the Caribbean sea, the country enjoys temperate weather all year round.

In fact,and as stated on the Where When How website, Turks and Caicos ‘enjoys abundant sunshine’ and at the height of its summer months average temperatures of 31 degrees Celsius. Hence, Turks and Caicos provides a truly sunny retreat from the wet, wild and windy climate experienced here in the UK, with even winter temperatures managing to outdo those felt even in a British summer.

Consequently, not only is Turks and Caicos the ideal country to travel to enjoy soaking up some rays, with winter temperatures averaging 25 degrees Celsius and many of its finest resorts, such as the Blue Haven TCI resort offering a ‘winter early booking bonus’ holiday makers stand to make huge savings and can look forward to banishing their winter blues by considering taking their annual holiday during the winter rather than summer months. 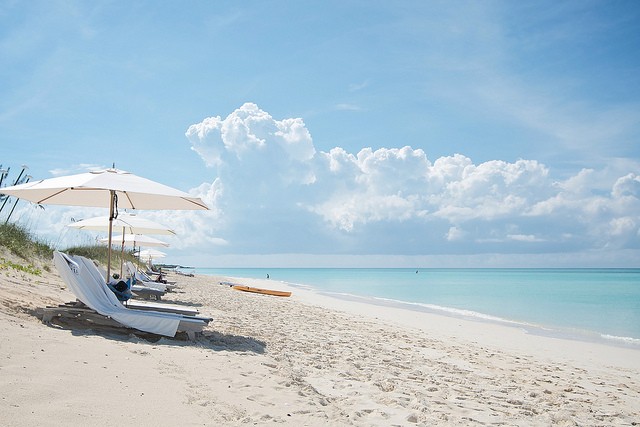 Whilst Turks and Caicos is perhaps most famous for its pristine white beaches, warm blue waters and laid back Caribbean culture, there is certainly no lack of exciting and exhilarating activities and sports to experience and partake in once there. In fact, because Turks and Caicos is a country comprised of forty small islands and cays and so surrounded by shores, beaches, sea and the third largest barrier reef system, hundreds of thousands of tourists travel to Turks and Caicos every year to get stuck into a week or two of diving, biking, boating, golfing, fishing, surfing, kayaking and body boarding. And that is not half of what TCI has to offer.

Turks and Caicos is also home to some of the Caribbean’s best loved and highest rated countryside and natural landscapes, also boasting the Caribbean’s largest and most impressive non-submerged caves, those of Conch Bar Caves.

Because visiting and taking in much of its countryside and getting to many of its best loved landmarks and sports clubs, including the massively popular Provo Golf Club, Princess Alexandra National Park and National Museum, involve travelling its tropical terrain and even engaging in a little island hopping, this provides the perfect opportunity to hire a push bike, get your running shoes on or simply get walking. Alternatively, a number of tour operators, such as Big Blue Unlimited, are well worth speaking to if it is adventure and action you are looking for in a holiday.

Very few holidaying locations are worth visiting for their beaches alone, yet Turks and Caicos is one of them. After all, more than half its entire coastline is soft sand which translates into meaning that Turks and Caicos has over 230 miles of beach and better yet, 230 miles of the world’s best quality beaches and shores. And that is not the only way by which Turks and Caicos stands apart from the huge choice of alternative Caribbean retreats out there.

The island of Providenciales, which is by far the most modern, populated and popular with tourists, perhaps is so because it also happens to be home to what has now numerous times been voted ‘the world’s best beach’ according to the Trip Advisor Traveller’s Choice Awards. And anybody who has set foot on Grace Bay beach is unlikely to argue otherwise; boasting waters so warm during the summer months they can easily and often reach 29 degrees celcius, dropping to a low of 23 degrees celcius during the winter months, it is not just the stunning shores and sands that attract people from all over the world to Grace Bay Beach.

Grace Bay is not only the name of one of the most impressive, pristine and luscious beaches the world has to offerthough but is in fact a seaside destination poised on the north eastern edge of the island of Providenciales. As such, it is also home to some of the most stunning resorts on offer in Turks and Caicos, such as the Beach House TCI resort which occupies a stunning colonial mansion house overlooking grace bay beach itself.

Tips for Taking a Summer Trip to Japan

3 Alternatives To A Timeshare For A Perfect Summer Holiday

Everything To Pack When Camping For the...

How to become a permanent residence of...

The Balinese Way of Enjoying a Holiday