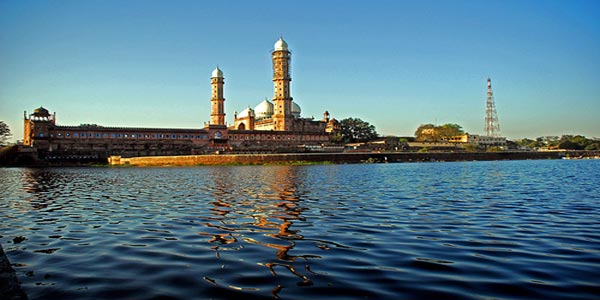 Madhya Pradesh is one of the State of India, and as geographically it is in the center of the country, it is also known as the heart of India. Bhopal is the capital of Madhya Pradesh. It is a fascinating combination of old historic city, modern, urbane city, and scenic beauty. This city is also located in the middle of India. Many tourist attractions like Sanchi, Ujjain are close by and well connected via rail as well road route. It is also known as one of the greenest cities in India. The city also has a huge heritage regarding art, history, and culture.

Famous tourist destinations of this famous lake city are:

A beautiful man-made lake was constructed in by Raja Bhoj in the 11th century. This lake was believed to cure the incurable diseases. This splendid spot has a royal garden known as the Kamla Park in its vicinity.

Bhimbhetka houses the oldest cave paintings. This heritage site is a must visit for all history enthusiasts.

Van Vihar National park is over an area of about 445 sq km. It is modern zoo park, following the guidelines set by the Central Zoo Authority.

The city of lakes has two famous lakes – the upper and the lower lake that is separated by a bridge called Pulpukhta by the locals.

GoharMahalwas constructed by the first woman ruler of Bhopal, Gohar Mahal in the year 1820. This is one of the most stunning structures in Bhopal.

Bhopal is known for its embroidery and beadwork. Exquisite fabrics like satin, silk, and pashmina are sold in private showrooms and the government-run emporiums.

The remnants of the glorious prehistoric era of Madhya Pradesh are preserved in the Birla Museum.

Shaukat Mahal is one of the best examples of Indo-Islamic and European architecture put together.

The Moti Masjid is famous its architectural marvel and religious importance.

The Archaeological Museum gives a deep insight of rich culture of Madhya Pradesh.

Bharat Bhavan is a center for performing and visual arts. The amazing architecture of this institution leaves the tourists spellbound.

Taj-ul-Masjid is one of the largest mosques in India. This mosque has enormous domes and hallways. However, non muslims are not allowed to enter the mosque.

The DB City Mall is one of the biggest malls in the city. It expands up to 125000 meters.

The new market is located in the heart of this city. It is a famous local market.

Jama Masjid was constructed by Quidsiya Begum. This classic Islamic architectural piece is famous among the tourists.

For more places to visit you can look at fogut.com for details.

Things to Look for in the Best Tsim Sha Tsui Hotel

Make your booking of hotels and resorts through online

What makes Bangalore the best city to...

How to choose the best travel agency

Going for guided city walks around the...

The most remarkable things to do in...

How to Be Safe on Your Next...

Things to Look for in a Sydney...